Put the U.S.-China trade war to the side, folks, because we’ve got a new war in town. The “Streaming Wars” have officially begun after The Walt Disney (DIS) made its move with the launch of Disney Plus this morning.

Unfortunately, there’s been widespread difficulties in accessing any of the promised content!

Shortly before 7 a.m. Eastern, Disney fans began seeing a blue screen announcing that their device was “Unable to connect to Disney+” – often accompanied by a cute cartoon of Mickey Mouse or Wreck-It Ralph.

Nonetheless, the stock is up 1.5% in today’s session, considerably better than the broad market.

However, regardless of investors’ reaction – and users’ dismay at these technical difficulties – I would note one thing:

Most, if not all, of the biggest companies have weathered terrible product launches…and gone on to greatness.

Today, of course, wearables and other mobile devices have largely taken over the world – and so have GOOGL and AAPL. (In fact, Google announced a few weeks back that it was acquiring Fitbit (FIT), a major player in the fitness wearables market, for $2.1 billion.)

Even New Coke lives on today as the basic formula for Diet Coke. And New Coke itself saw renewed interest thanks to the latest season of the 80s-era show, “Stranger Things.” All the while, of course, KO has been an unstoppable global powerhouse.

To me, this says that when evaluating a company, you have to look at the bigger picture. Rather than banking on any one product launch, it’s important to look at the long-term determinants of an investment’s success or failure:

Those are also the key tenets of the stock-picking system behind all of my best Growth Investor buys.

So, let’s look at how DIS stacks up on those factors: 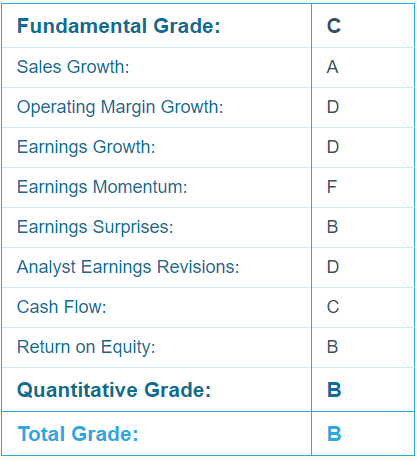 Here you see that Disney earns an “A” for Sales Growth. And Disney Plus may well prove supportive of this, going forward. After all, the outages were likely a victim of “consumer demand [that] exceeded its expectations,” as Disney put it to Associated Press reporters this morning.

As for its popularity on Wall Street, DIS receives a strong, “B” rating for its Quantitative Grade – my proprietary measure of institutional money flow.

But you’ll notice several sore spots as well. While I admit that Disney does clearly have a strong history of positive earnings surprises, otherwise, it just doesn’t measure up in terms of profitability. DIS gets a “D” for Analyst Earnings Revisions, Earnings Growth, and Operating Margin Growth. What’s worse, it gets an “F” for Earnings Momentum. (Not only is DIS not growing earnings to my satisfaction, it appears unlikely to do so anytime soon.)

At the end of the day, Disney just isn’t an innovator like Apple or Netflix (NFLX). While those two companies deliver hot new shows and movies, Disney is still relying on the same old franchises. Ultimately, I think Apple TV+ – whose launch has been smooth and well-received thus far – will capture market share and be the #2 streaming play, behind Roku (ROKU).

That being said, there’s actually a much bigger trend at play here.

Rather than an individual media company like DIS or NFLX – or even device makers like AAPL and ROKU – I’d rather invest in the one thing that will take ALL of these companies into the future:

The “Mother of All Technologies”

Up until now, technologies have certainly made our lives easier and more efficient … but with a lot of room for human error. People trip over cords, spill their coffee and get tired.

Artificial intelligence does not.

If that sounds futuristic, well then, the future is already here. If you use Netflix (namely, its personalized recommendations of TV shows and movies), then you’re already using AI. The same is true of TurboTax, QuickBooks, Zillow (Z) and even email spam filters.

The bottom line is that AI is already helping your day run more smoothly. And as scientists find even more applications for artificial intelligence – from healthcare to retail to self-driving cars – it’s incredible to think of the potential here.

As far as investments, the strategy I’m using here is something I call finding the “Master Key.” Think of it like a single key that can unlock any door in a giant building.

Intel (INTC) was the Master Key to the PC revolution. And here, the Master Key is the company that makes the “brain” that all AI software needs to function, spot patterns, and interpret data.

It’s known as the “Volta Chip” – and it’s what makes the AI revolution possible.

Now, you don’t need to be an AI expert to take part. I’ll tell you everything you need to know, as well as my buy recommendation, in my special report, The A.I. Master Key, exclusively in Growth Investor. The stock is still under my buy limit price – so you’ll want to sign up now; that way, you can get in while you can still do so cheaply.