Square (SQ) sits right at the corner of just about every major trend of the modern age. So perhaps its no surprise that the payment-processing company turned in some great revenue figures in its third-quarter report on Wednesday evening:

Wall Street analysts had been expecting third-quarter revenues of $597 million, which would itself have been a nice uptick from $431 million in the year-ago quarter. Instead, Square blew this away with actual revenues of $1.3 billion.

As for the future, Square also raised its revenue guidance for the full year. Previously the company had projected that 2019 revenues would come in at $4.41 million – $4.47 million. Now, Square expects to do $4.560 million to $4.580 million this year.

That’s more than enough to deserve the 5% pop SQ made on the earnings news.

But is SQ worth owning now? When you dig into the numbers from that perspective, the picture gets a little more complicated.

SQ has undoubtedly been a better performer than CEO Jack Dorsey’s original venture, Twitter (TWTR). SQ is up a nice 395% since its November 2015 IPO. In the same timeframe, TWTR stock is up barely 11%, so that’s a pretty impressive run. 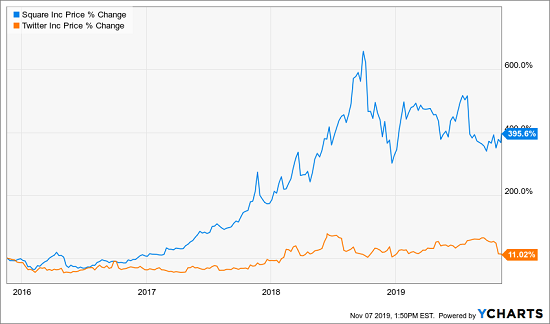 There are two reasons for this. The first is that Square executives clearly have their eye on the latest consumer trends… and aggressively pursue them. Last month, the company announced that its payment products and services would now be available nationwide to sellers of cannabidiol (CBD) – an industry where vendors have struggled to find bank partners.

Previously, Square ventured into the food delivery trend with the app Caviar, which it just sold to DoorDash for $410 million. But its Venmo competitor, Cash App, has had more staying power. In fact, Square has expanded Cash App into providing debit cards, bitcoin, and now even free stock trading.

But, ultimately, the company’s success (and that of SQ stock) is due to its fundamental business model. Square’s core products are perfectly suited to anyone starting “side hustles” and small businesses these days. But until Square came along in 2009, payment processing was a major hurdle. Now “there’s an app for that” – as Apple (AAPL) would say – and to access it, sellers just need to plug their tablet or phone into one of Square’s sleek devices.

This was the context for the stock’s overall Report Card from my Portfolio Grader tool. Even prior to Wednesday evening’s earnings report, SQ rated a “B” on the fundamentals, as you see here: 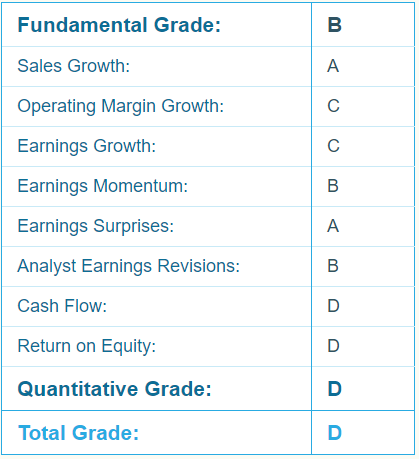 Given the steep climb Square’s revenues have made in just a few years, it’s unsurprising to see its “A” rating for Sales Growth. Those who already own SQ (or want to) will also be pleased to see Square’s strong history of positive earnings surprises. It continued that tradition in the third quarter, in which adjusted earnings totaled $0.25 per share, compared to the $0.20 expected.

Profitability is a key factor in the stock-picking strategy I developed to find the best growth investments.  But, I’d caution you: There’s more to it than just beating expectations.

As an investor, I also want reliability. And in its 2019 forecast, Square started to signal that there could be earnings weakness ahead. Specifically, its full-year earnings projection came in light of expectations. Whereas Wall Street analysts had expected $0.25 earnings per share, now Square says to expect just $0.19 to $0.21 per share.

The other factor that’s held me back from recommending SQ is its dismal Quantitative Grade of “D.”

I’ve been at the investing game for a while, ever since my grad-school days at Cal State Hayward in the late 1970s. And I discovered that stock performance is largely determined by institutional buying pressure. Stocks that are popular on Wall Street are, naturally, more likely to succeed long-term. This is what my Quantitative Grade is designed to measure.

And when a stock falls down on its Quant Grade, it becomes an automatic “Sell” in my stock-picking system.

Timing is everything – and it appears that big money fled SQ ahead of earnings. So, that should certainly give investors pause. While I appreciate its strong fundamentals, ultimately I like to go where I see strong momentum for future gains. Until SQ gets its earnings trend back on track – and proves that it can attract the “smart money” on Wall Street – this stock just doesn’t fit the bill now.

Meanwhile, a very different group of stocks is tapping into a major technological advance. Most folks don’t know much about it – but once you do, you’ll see the incredible potential here. Click here for a free briefing on a major trend that’s just getting started.