There’s a bit of controversy in the market right now. One camp says, “Stocks are about to soar. October through December is the seasonally strong time of year!” The other camp says, “There’s too much headline risk from the trade war, the Middle East, impeachment, and more.”

So which is it?

Folks, the numbers don’t lie. Here in the fourth quarter, consumers get more money to spend, thanks to pension outflows. The timing is good, what with the holiday shopping season. And you can’t discount investor psychology, too; November and December is just a “feel good” time of year and the market benefits from the “Santa Claus rally”.

So, just keep watching the market’s best stocks, and buy the dips. Don’t get too distracted by the naysayers. They’ll always find something negative.

When I was in college, for example, my economics professor told me that the stock market could not be beat… that you might as well put your money into index funds and call it a day.

But then I wrote an algorithm that crushed the S&P by a factor of more than 3-to-1. My algorithm worked so well, in fact, that I even began publishing stock recommendations out of my dorm room. I wasn’t even 19 yet!

Yep, new technologies and investing can be a powerful combination, if you have a few programming skills.

I’m proud to say I was there for some of the biggest success stories in the past 30 years. Let’s take a quick look back, because these events are still very instructive today. Keep these lessons in mind next time there’s a bad earnings headline, or some other excuse for the “permabears” to spout gloom and doom on TV.

How I Discovered the Most Innovative Companies Before The Crowd

I’m an investor who likes to “follow the money.” So, I’m constantly fine-tuning my stock picking system – and finding exciting new applications for my methods. My latest is called Project Mastermind.

And back in the day, I wrote a proprietary trading code that uncovered Oracle (ORCL) when it was trading for just $6 per share… well before it became one of the leading and most valuable software corporations in America and traded north of $45.

It zeroed in on Google (GOOGL) way back before most Americans had even heard of the company. Today, it’s over $1,000 per share!

MarketWatch even recognized me as “The advisor who recommended Google before anyone else.” But it wasn’t really me who first spotted it; it was my proprietary algorithms. All I had to do was know a good thing when I saw it.

That’s also how I uncovered other huge winners too, like Apple (AAPL) and Intel (INTC), all before they became big household names.

In fact, the environment right now feels very much like it did when I bought Intel in the 1980s.

Lessons of the PC Revolution

I vividly remember the days of mainframe computers. That’s what I used back when I was working on my trading algorithms in college. Mainframes were massive and by today’s standards slow and rudimentary.

It was a tiny device — the silicon microchip — that barely anyone had heard of when IBM started putting them into the first PCs. But Intel’s chips were far and away the best.

Today, you’ll still find “Intel inside” just about every PC in the world. And its stock price has gone up 11,875%! 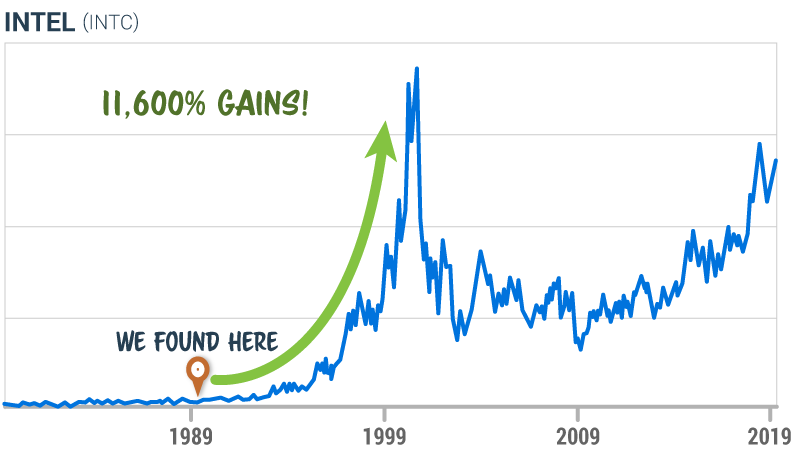 I mention it because we have just this kind of opportunity today.

The same pattern played out with NVIDIA (NVDA) in recent years. The company makes graphic processing units (GPUs) for consumers and businesses – more of them every day – though time will tell if it’ll run as high as Intel.

All I know is that, thanks to Project Mastermind, I recommended this stock to my subscribers back in 2016. Then in 2019, we sold it for a whopping 166% gain!

Now, on October 9, at 7 p.m. ET, I’m hosting a special event where I unveil Project Mastermind and reveal the stock I’ve rated number one based on insights from Project Mastermind – ticker symbol and all. Click here to sign up and join us.

Note: This recommendation is flashing all the same signals as the other winners I mentioned today. So, I’m confident in saying – this stock has the potential to double your money or more over the next three months.

Mark your calendars and don’t miss my special event! Between the glimpse at my system and potential access to its number-one stock pick, you’re not going to want to miss out on what I’ll be sharing on Wednesday.