Well, if the stock market decided to play “trick or treat” with investors this year, it sure looks like it picked treat! The S&P 500 closed at a new all-time high yesterday and then treated investors with another record high today.

This is very exciting, as this is the first time the S&P 500 has hit a new high since July 26. And now, according to Bespoke, we could be in for even more upside! You see, it’s considered very bullish when the S&P opens at a record high. 32 other times this has happened the S&P tends to outperform. 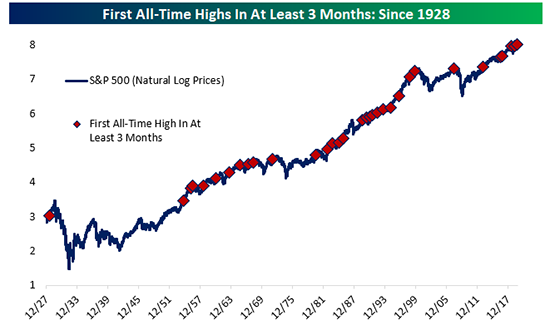 Keep in mind that the stock market performance was almost flipped last year. In fact, on October 29, 2018, it was all “tricks” for the S&P 500. It fell 1.5% that day. The truth of the matter was that last October was a pretty rough month for the stock market overall. You can see it in the chart below.

There were a lot of factors behind the selloffs, including a big tech correction, scary macro headlines, climbing Treasury yields and widening ETF spreads. (I talked a lot about the ETF spreads in last week’s blog post. If you missed it, you can read it here.)

In comparison, here’s how the S&P 500 has performed this October:

Now, there is one interesting fact you should all know. Marketwatch recently reported that average daily trading volume in the S&P 500 is now at a 10-year low. And trading in the S&P 500 in the past 90 days only represents 7% of overall market capitalization, compared to 21% between 2010 and 2013.

There are several reasons why the S&P 500’s trading volume is now running at a third of what it used to only a few years ago. The first reason is the boom in indexing and ETFs, as investors do not trade too frequently in these investments. The second reason is all the fear-mongering media, which has spooked investors and left many sitting on the sidelines.

Thankfully, when the stock market rallies, many of these investors on the sidelines are starting to pour back into the market in an obvious attempt to “catch up.” We’ve started to see that happen as third-quarter earnings have been released in the past few weeks.

Not only are third-quarter earnings coming in better than analysts’ forecasts, but many companies are also issuing positive guidance. According to Factset, as of October 25, 40% of the S&P 500 companies have reported their results. Of those companies, 80% have reported earnings surprises and 64% have reported revenue surprises.

Earnings results have been coming in fast and furious over the past couple of weeks. 31 companies have released their quarterly results so far, and more than half have reported an earnings surprise.

Clearly, we’re in a very bullish market environment right now. So if you’ve been sitting on the sidelines, you’ve been missing out. I get it – it can be scary to jump back into the market, especially when you consider how bad of a month October was last year and how the fear-mongering media just won’t let up. And there are too many investors who let fear of a loss keep them from the biggest gains.

The good news is that there is a way to protect yourself from future volatility: Own the stocks that will see high demand on Wall Street.

And what Wall Street always needs is stocks that offer both growth and income. Myself, I go a step further: The only Money Magnets I want to own are the ones that have the best fundamentals.

So, if a stock gets top marks from both my Portfolio Grader and my Dividend Grader tool… then it’s a “must have” in Growth Investor.

I just recommended a new stock that fits this criterion to a “T.” The company will be releasing its quarterly earnings results on October 31, and the third quarter will represent the trough in earnings for the company. It is forecast to deliver triple-digit annual earnings growth in the fourth quarter.

Once those earnings are out, I expect the “smart money” to jump in and drive shares higher. You definitely want to buy this stock before its quarterly report is out, so sign up here now for all the details.