In the financial media, everyone’s starting to ask, “What will the Fed decide at their policy meeting next week?” But the question WE need to be asking is… “What will it mean for us, as investors?”

Frankly, the answer to the first one is pretty clear. Let me briefly show you why, then we’ll look at the next steps for investors.

In its last policy statement, from the September meeting, the Federal Reserve Open Market Committee (FOMC) tipped its hand. (That was probably by design, as the one thing the stock market hates is a surprise.)

The minutes from that meeting revealed that “downside risks to the outlook for economic activity increased somewhat since their July meeting.” Since the whole point of low interest rates is to “juice” the economy, that’s a pretty good signal that the FOMC, led by Fed Chair Jerome Powell, is planning another rate cut.

Powell has also said that the Fed intends to raise its purchasing of short-term Treasury bonds. I go into more detail about what the Fed’s up to (and the implications) in tomorrow’s Growth Investor Monthly Issue. But bottom line: The Fed saw that when its bank reserves started to decline, overnight rates would spike higher. Thus, reversing that situation gives the Fed more control – presumably, with the goal of keeping rates low.Then you’ve got to look at the “yield curve.”

Below you’ll see a more normal yield curve from May 2018 (the gray line), in which yields gradually get larger for longer-term vs. shorter-term Treasury bonds. However, the current yield curve (the blue line) is pretty flat, i.e. heading toward the situation we saw this summer (the red line). The yield curve actually inverted, and the Fed promptly started cutting rates to help out the big banks. 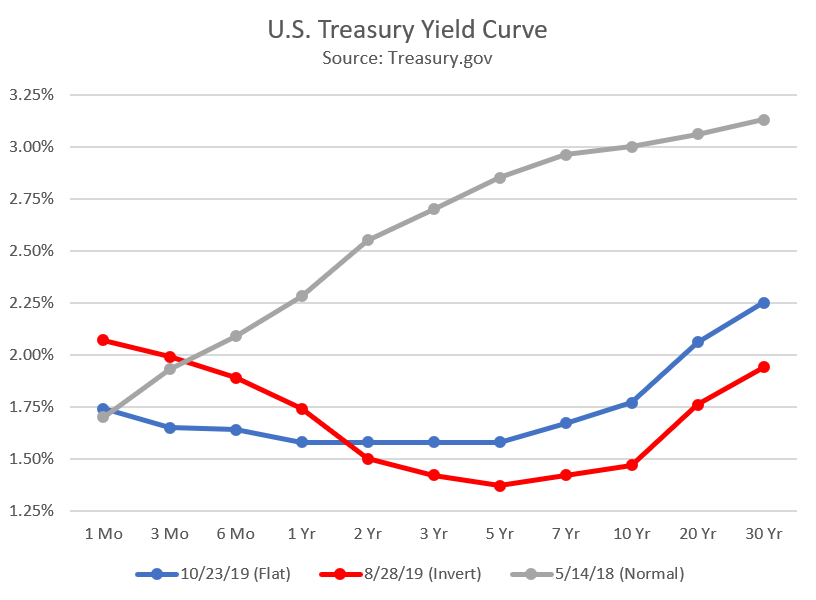 All in all, the Fed is extremely likely to cut key rates by another 0.25% at the October meeting. By un-inverting the yield curve, it helps the big banks stay profitable.

But, of course, banks aren’t the only ones who benefit from a rate cut. All of us do, from the standpoint of the consumer economy.

What This Means For Us

As I always point out in Growth Investor, consumer spending accounts for more than half of U.S. GDP growth. And it’s been on a pretty steady climb ever since the economic recovery began in 2009.

Ultra-low interest rates are supportive to this. Naturally, when you can get a good rate on a mortgage or an auto loan, that drives home and vehicle sales – which, in turn, will further ignite consumer spending. And that’s been the case for the past 10 years as well.

So, with rates likely to take another cut, it’s worth looking at consumer stocks like Chipotle Mexican Grill (CMG), which just turned in a great quarter on Tuesday afternoon.

Chipotle is one of the few restaurants to make the cut for my Growth Investor recommendations at this time. It’s a low-margin industry, but Chipotle isn’t your typical chain. When you step into one of its fast-casual restaurants, you won’t see a lot of “frills,” but you will see its Mexican-inspired dishes prepared by hand, in a real kitchen, with fresh, simple ingredients.

And CMG has been having no troubles with profitability. During the quarter, the company achieved adjusted earnings of $3.82 per share, or 76.9% annual earnings growth. Analysts were expecting earnings of $3.22 per share, so CMG posted an 18.6% earnings surprise.

Chipotle Mexican Grill also reported that revenue rose 14.6% year-over-year, including comparable restaurant sales growth of 11%, while digital sales soared 87.9%. And the company opened 25 new restaurants in the quarter.
So, if you’re looking for growth plays, you’d do well to consider companies like Chipotle where consumers are (literally) lining up to spend their cash.

In fact, CMG is one of my Top 5 Stocks for November in Growth Investor. Click here for more and sign up to get the full list, with buy-under prices.

Note: In tomorrow’s Monthly Issue, I’ll also have two new stocks that I’m excited to recommend. One, for my High-Growth Investments Buy List, is a play on the 5G infrastructure buildout, which is one of my top trends right now.

The other new stock pick is for my Elite Dividend Payers Buy List. These stocks not only have top-notch fundamentals, plus strong buying pressure, earning them an “A” from my Portfolio Grader tool…

They also earn an “A” from Dividend Grader. In other words, they have a stable, growing dividend – and the rock-solid business model to back it up.

I’ve got a free briefing for you on this strategy. Go here for details and sign up to receive tomorrow’s two new buys.