Imagine watching an NBA basketball game, and Lebron James is having a terrific game. He has just made six shots in a row. The game is close, and Lebron is clearly lining up to take another jump shot.

What are the odds that he is going to make that shot?

In basketball, players and coaches will often talk about the “hot hand.” This refers to the phenomenon that someone who has made several baskets in a row has a greater chance of making the next one.

But that’s a fallacy. The odds that Lebron James or any other player will make his next shot remains the same, regardless of how many baskets they have made previously.

The belief in the “hot hand” is a well-studied example of Recency Bias.

And if you don’t know the term, you certainly understand Recency Bias if you’ve ever had an annual performance review at your job.

Odds are that your supervisor remembers a lot of what you’ve done in the last month but can’t remember work completed nine months ago. As a result, you’re more likely to be judged for the last month, than the last year.

And this same bias is likely affecting your portfolio, too.

Now, as you know, this is the Peak Performance Series at Market360. Each day, I’m detailing the human behaviors that can cost us big money as investors… and how you can neutralize their costly effects.

Over the past week, we’ve talked about Overconfidence, Disposition Effect Bias, Self-Attribution Bias and Crowd-Seeking.

So, in today’s essay, I’ll detail Recency Bias, how it works, and how you can avoid it.

In investing, Recency Bias occurs when a stock has momentum, either up or down. If a stock has been going up for the last six months, folks naturally believe it is likely to keep going up.

The inverse also happens. If a stock hasn’t gone up in six months, it seems likely to not turn around and go up any time soon.

On a wider level, if it has been 10 years since the last bear market (sound familiar?), investors are more likely to believe one is not coming soon.

But using Project Mastermind, we don’t need to rely on momentum to tell us which stocks to buy or sell. We use math and the latest technology to find the stocks that are about to break out to the upside – regardless of how they have performed recently. 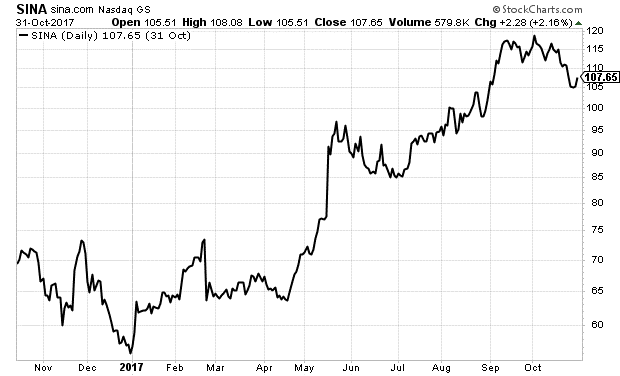 Most analysts don’t even cover stocks this small, or they recommend them after their big run up. That’s where Recency Bias can cost you money.

However, as we just saw, if you can find the right stock BEFORE that next major event…you can make large gains in a much shorter period of time.

But you don’t have to let your future be governed by Recency Bias or any of the other biases we have covered in the Peak Performance Series.

All you need is the right tools.

That’s why I developed my stock grading system.

Instead of eyeballing a stock chart and seeing how it has performed lately, my system runs the numbers using thousands and thousands of points of data (fundamental as well as momentum indicators). It finds the very best names and sends me an alert that a stock is about to skyrocket. Because the alert is developed using only data, I don’t have to worry about falling victim to Recency Bias.

Instead, you can go back to investing in your retirement. And if you’ve already started investing, the gains with my Project Mastermind can help you supercharge it.

I’m expecting some of the fastest gains in my career – we’re talking about moves of 100%, 200% and even 500% in months instead of years. That being said, the key is not to get impatient…or greedy. My system isn’t capable of that; it simply looks for the same precursors that have portended every great stock play of my career. Click here to find out more.

Just yesterday, I issued a brand-new Buy Alert based on Project Mastermind in Accelerated Profits. It is a Chinese company that is in prime position to benefit from any U.S.-China trade deal. But, more importantly, it has the fundamentals required to keep it firing on all cylinders.

The company is set to report its earnings results for its first quarter in fiscal year 2020 next week, and a strong report could make its stock surge.

I don’t want you to miss out once the stock really takes off, so make sure to sign up here to get my buy advice.

Note: This recommendation is flashing all the same signals as the other winners I’ve mentioned lately. The secret to this is simple: Through hundreds of hours of research, I discovered how an elite type of stock consistently outperformed the broad market, year in and year out. Then I isolated the eight key qualities that these super-performers shared.

Between the glimpse at this stock-picking methodology and potential access to its hottest stock picks, you’re not going to want to miss out on what I’ve shared in my Project Mastermind presentation. We’ve got to take it down soon, so watch now.