While it’s certainly proven itself as a growth play, BBY fits the bill for us at Growth Investor in other ways, too (more on that in just a moment). But first, it’s worth looking at how BBY turned things around…as we’re seeing the same pattern throughout the industry.

Back when competitors like Circuit City were disappearing – and everyone assumed Best Buy would soon fall victim to Amazon (AMZN), too – its stores were focused mainly on video games, movies and CDs. (To any youths who may have come across this, CDs were a way to listen to music without the internet.)

Well, today, Best Buy’s growing its revenues outside of these traditional categories. In its late August earnings report, Best Buy noted that “The largest comparable sales growth drivers were appliances, tablets, headphones and services.” In other words – products that most folks prefer NOT to buy online…and maybe even require interacting with a human. Imagine that!

The latter category, “services,” might sound obscure. But Best Buy suppliers like Apple (AAPL) are making this very same switch, from hardware to services, at the same time. These days, Apple’s Services (like Apple Care, iTunes and the App Store) are the big profit driver. In fact, Apple makes twice as much from Services versus the wearables, the Macs and even the iPads.

Similarly, at Best Buy stores, their Geek Squad services helped see the company through the supposed “death of brick-and-mortar retail.”

And Best Buy executives are clearly smart enough to know that they have to keep “recreating that magic” to survive. So, now they’re moving into a surprising new market.

Last August, Best Buy purchased a company called GreatCall for $800 million. While GreatCall is better known as the creator of the Jitterbug phone, it also does a lot of business in services…namely, medical alerts, emergency calling and even rides to a doctor via Lyft (LYFT).

This was another reason Best Buy has kept growing revenues – even after deciding to close 13 of its “big box” stores in the last year.

In May, Best Buy acquired a similar health-monitoring company, Critical Signal Technologies (whose service is a supplemental benefit under Medicare Advantage). As for GreatCall, the combined company is about to open a third call center in San Antonio, Texas, next month.

So yes…BBY does make the grade for Growth Investor. But here’s the thing: I like it even better as a dividend investment.

Take a look at how BBY measures up in my Dividend Grader tool: 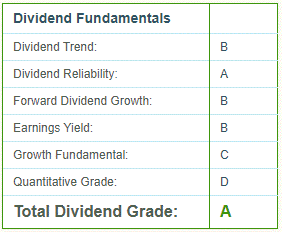 Critics can talk about “Amazon’s showroom” all they want. But dividend investors will appreciate BBY’s strong scores on Earnings Yield, Dividend Trend and Forward Dividend Growth…as well as top marks for Dividend Reliability.

That being the case, it may not surprise you to learn that BBY is a staple of my “Elite Dividend Payers” Buy List at Growth Investor …where we’re up 39% in less than three years.

Bottom line: I think Best Buy has smart management – and, thus, a bright future; however, I would like to see its Fundamental and Quantitative Score come up. That would earn it an “A” from my Portfolio Grader tool (in addition to its current “A” from Dividend Grader).

When stocks achieve this “AA” rating, well…those are stocks any investor would be crazy not to consider.

How to Find the Crème de la Crème

With such high marks for growth and income, I often refer to this group of stocks as the “Money Magnets.” That’s especially true now, for one simple reason: falling interest rates.

Much was made of the U.S. Federal Reserve’s decision to cut the Federal Funds rate last week to 1.75%-2%. But overseas, bonds are often paying negative yields these days!

Well, we can’t do without income. That’s true for you and me, and it’s true on Wall Street. Therefore, one of the best ways to protect yourself AND profit is to focus on the Money Magnets at this juncture.

I’ve got a free glimpse of this Growth Investor strategy for you now. Go here for more, and to see all 3 steps you should take today.

Make sure to sign up soon, as I’ll be releasing two brand-new stocks – a dividend stock and a growth stock – in this Friday’s Growth Investor Monthly Issue.