Or so said Clive Humby, a British statistician, in 2006. He should know; he created the first supermarket loyalty card on behalf of Tesco (TSCDY). And with the data gleaned from that “Clubcard” program, the U.K. grocery chain doubled its market share from 1994 to 1995 alone. Talk about a valuable commodity!

If data is the new oil, then who is Big Data’s version of an oilfield services company like Core Laboratories (CLB)? It’s worth knowing – because in one boomtime, CLB stock went from $5 to $60 per share in just five years.

Well, for data services, one clear equivalent would be VMWare (VMW), a little-known stock that’s up roughly 70% for us at Growth Investor.

The “VM” in “VMWare” stands for virtual machines, which is software that solves a big problem for many businesses: too many servers. The more your company grows, the more data storage you need, but multiple servers quickly become a major headache – and costly. Instead, you can just log into VMWare, and do all your computing on one server. Things run faster and more efficiently, with less confusion. No wonder VMWare grew both earnings and revenue (+12% year-over-year) in the second quarter, both of which beat Wall Street expectations.

Now, these days, many companies don’t keep their own servers, or even rent space in a data center…they just use cloud (online) storage. Or they use some combination of the three. And when it comes to this “hybrid cloud,” VMWare has pretty much cornered the market.

That’s thanks to a historic partnership with one of my other Growth Investor picks: Amazon (AMZN). You might think of Amazon more for online shopping, or to buy e-books for your Kindle. Well, these days, its biggest profit driver is actually Amazon Web Services (AWS).

VMWare was already a leader in the cloud computing field; it is the infrastructure platform choice of 100% of the Fortune 500. It also has strong marketing relationships with computer hardware vendors, like Dell, Hewlett-Packard and IBM. Now that this “private cloud” company has partnered with Amazon’s “public cloud” service, customers don’t need to choose.

Below you can see VMWare’s products for your data center and for VMWare Cloud, plus Amazon’s own cloud services – and how they can all interact. For Big Data, VMWare and AWS is a “one-stop shop.” 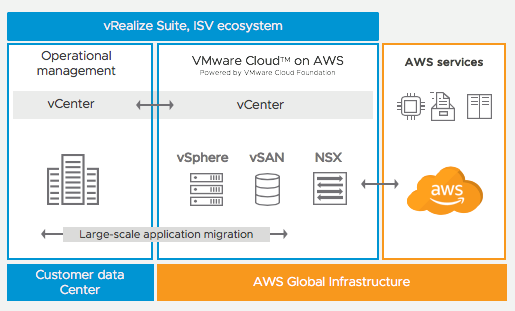 Hospitals, banks, car companies, the Make-a-Wish foundation, even candy companies and colleges all use VMWare to make their data operations more modern (and thus more secure).

There’s just one final frontier for VMWare and AWS (and their customers): the “mother of all technologies.”

Up until now, technologies have certainly made our lives easier and more efficient…but with a lot of room for human error.  People trip over cords, spill their coffee, and get tired.

Artificial intelligence (A.I.) does not.

As scientists find even more applications for artificial intelligence – from healthcare to retail to self-driving cars – it’s incredible to imagine how much data will be involved.

To create A.I. programs in the first place, tech companies must collect vast amounts of data on human decisions. Data is what powers every A.I. system.

After all, in the 2003 oil boom, investors could either speculate on oil futures contracts… or they could have bought shares in Core Laboratories.

Core did no drilling or exploration of its own. It provided technology to lots of companies who did. And as oil prices climbed from $30 per barrel in 2003 to $100 per barrel in 2008, Core’s customers had more money to spend on exploration. Along with that, CLB stock rose 1,100%…with less risk.

Core Laboratories was the Master Key to the 2000s oil boom. And here, the Master Key is the company that makes the “brain” that all A.I. software needs to function, spot patterns, and interpret data.

It’s known as the “Volta Chip.” Last week, VMWare just signed a big deal with this very company — and its Volta Chip is what makes the A.I. revolution possible.

None of them, however, are programmers…or any kind of tech guru. You don’t need to be an A.I. expert to take part. I’ll tell you everything you need to know, as well as my buy recommendation, in my special report for Growth Investor, The A.I. Master Key. The stock is still under my buy limit price — so you’ll want to sign up now; that way, you can get in while you can still do so cheaply.