On Friday, we dug deeper into 5G and looked at how it could revolutionize the Internet of Things (IoT) and self-driving cars.

Today, I want to talk to you about artificial intelligence (AI), which is set to flip the entire tech industry on its head and kick off a new era. And as an investor, when you see a massive trend forming, it’s always worth taking a closer look. More importantly, you should take a look BEFORE the trend truly takes off.

Right now, scientists are developing the next generation of computing technology. And once it’s widely available, it’ll trigger what Forbes called the “Next Industrial Revolution.”

Take a moment and just think about how much things have changed since the first computers, back in the mid-20th century. Remember mail and interoffice memos? Those have been largely replaced by email… Retail is going online… Phones, security systems, thermostats and even refrigerators have all been computerized.

However, there’s still a lot of room for human error. People trip over cords, spill their coffee…even fatigue can cause pretty significant setbacks in a computerized world.

Plus, with the “Internet of Things,” there is just too much data for the human brain to analyze. We have become a roadblock to our own technology.

That’s why the second wave of computers will not only work with massive amounts of data, but they’ll interpret it themselves. And they’ll communicate and learn from each other. We need machine learning — artificial intelligence will take everything to a whole other level.

Even in these early days of AI, computers are making extremely accurate predictions — picking up on patterns the human eye (and brain) cannot. Imagine what it can do when it’s more widely available.

In fact…it reminds me very much of the early days of personal computers (PCs), when entrepreneurs like Steve Jobs were just starting out. Tech breakthroughs were made — and fortunes won — virtually overnight.

I vividly remember the days of mainframe computers. That’s what I used back when I was working on my MBA thesis – the project that ultimately led to the development of Portfolio Grader. I was lucky enough to get access from the Wells Fargo data center and Stanford University. But of course, by today’s standards, mainframes were massive…yet slow and rudimentary.

It was a tiny device — the silicon microchip — that barely anyone had heard of when IBM started putting them into the first PCs. But Intel’s chips were far and away the best.

So, back in the summer of 1986, if you were wise enough to see how revolutionary PCs were — you had two choices:

Well, still today, you’ll find “Intel inside” just about every PC in the world. And its stock price has gone up 11,875%! 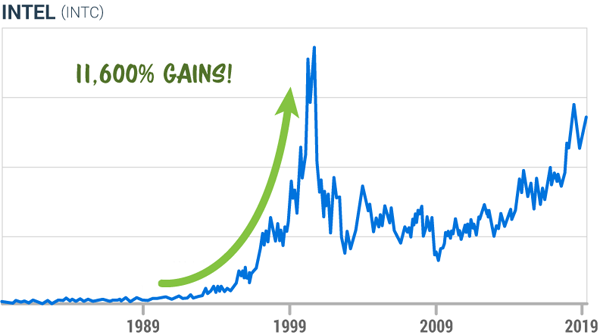 I mention it because we have just this kind of opportunity today with artificial intelligence.

It’s a strategy that I call finding the “Master Key.” Think of it like a single key that can unlock any door in a giant building.

Intel was the Master Key to the PC revolution. And here, the Master Key is the company that makes the “brain” that all AI software needs to function, spot patterns, and interpret data.

It’s known as the “Volta Chip” — and it’s what makes the AI revolution possible.

Some of the biggest players in elite investing circles have large stakes in the AI Master Key:

None of them, however, are programmers…or any kind of tech guru. You don’t need to be an AI expert to take part. I’ll tell you everything you need to know, as well as my buy recommendation, in my special report, The A.I. Master Key, which I just posted in Growth Investor. The stock is still under my buy limit price — so you’ll want to sign up now; that way, you can get in while you can still do so cheaply.