In the automotive industry, every company wants to come up with new technology that will make them a “Tesla Killer.” Now that Disney (DIS) is launching its own streaming service, folks are talking about a “Netflix Killer.”

This new product, Disney+, does have a lot going for it. More than 500 films and 7,500 TV episodes will be available, given all the properties Disney has bought: Marvel, Pixar, Star Wars, ESPN+ and Hulu. The latter two streaming apps will likely come in a bundle with Disney+.

And I should also add that Disney is undercutting Netflix (NFLX) in price, with a $6.99 monthly subscription.

Netflix executives say they’re “thrilled” to have competition. They’ve compared the streaming content industry to sports leagues: You can have multiple ones, but people will still love football. And more games, ultimately, create more sports fans.

Most importantly, it will take time for any competitor to get up and running. Until then, Netflix has the lion’s share of the market. The company will keep serving its nearly 150 million subscribers, and it will continue to pour money into its content.
That content, by the way, is quite different than what Disney is likely to offer.

“Netflix Killer” or no, Disney is still Disney: a family-oriented enterprise. On Netflix, people are logging in to watch old reruns of adult shows, or take in original series like the prison drama, Orange is the New Black.

So, to modify Netflix’s metaphor a bit, you could see a younger customer starting out in the “minor leagues” with Disney+, and eventually moving to the “major leagues” with more adult content at Netflix.

In the meantime, Netflix is the big fish in this pond. And its most-recent earnings report is the more pressing news at this time.

While Wall Street did not love Netflix’s second-quarter earnings guidance, the fact remains that in the first quarter, Netflix added more subscribers than in any previous quarter.

It also felt confident enough to raise its subscription price. I’m a numbers guy; do the math, and that’s more people paying Netflix more money. (It’s likely that Disney will be doing this math someday.)

Overall, for the first quarter, Netflix reported total revenue of $4.52 billion, or 22.2% annual revenue growth, and earnings per share of $0.76, or 18.8% annual earnings growth. The consensus estimate called for earnings of $0.57 per share, so Netflix posted a stunning 33.3% earnings surprise.

For an even closer look at NFLX’s fundamentals, let’s run it through my Portfolio Grader.

In this Stock Report, there’s no category for streaming subscriptions growth. But there is one for Sales Growth — and NFLX rates an “A”: 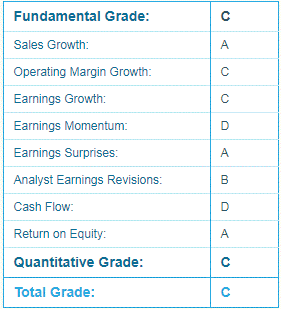 Recently, Netflix’s Earnings Momentum has left something to be desired, as has its Cash Flow. But, as you can see, there’s also a strong history of Earnings Surprises, which was further exhibited in the first quarter. So it’s possible that, when the second-quarter numbers do come in, Netflix bulls will be the ones pulling out their popcorn.

What I’d really like to see is NFLX improve its Quantitative Score. That is where the magic happens. I’ve build this parameter to, essentially, measure a stock’s money flow.

Fundamentals are important, but for long-term success, you also want to “follow the money.” In other words, the more money that floods into NFLX going forward, the more momentum the stock has to rise.

I’d also like to see NFLX start paying a strong dividend. Specifically, when I make an income recommendation, I’m looking for a history of stable, rising dividends.

When Netflix — or any company — starts paying a dividend, that certainly is a surefire way to attract big money on Wall Street.

That’s the trend that underlies a phenomenon I’m particularly excited about: the Money Magnets.

If you haven’t already, you’ll want to watch my free briefing on the Money Magnets now. In an increasingly tough market…these are the stocks that will shine.

For now, Netflix remains a solid hold in my Accelerated Profits service. Long-time members of this service are sitting on a 124% gain in the stock. But given the dwindling buying pressure and slowing earnings momentum, I don’t recommend adding to your current positions at this time.